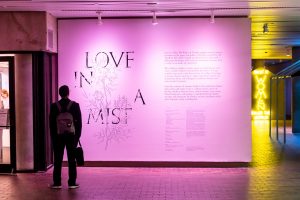 The final part of the exhibition is a homage to Donna Haraway’s “Children of Compost” fabulation and her plea to reimagine a different relation between humans, the Earth, and other living entities. The shared fate of human and non-human life on Earth in this time of environmental destruction and social injustice requires joining forces across disciplines, old wisdom and contemporary knowledge, cultures and species, to decenter the human and reimagine symbiotic living and sustainable and equitable futures.

Yael Bartana. What If Women Ruled the World? Neon and trailer, 2016

“It is two and a half minutes to midnight, the clock is ticking, global danger looms. Wise public officials should act immediately, guiding humanity away from the brink. If they do not, wise citizens must step forward and lead the way” (The Bulletin of the Atomic Scientists). Arriving at a moment of unprecedented worldwide flux, Yael Bartana’s performative project “What If Women Ruled the World?” brings some of the world’s best strategic minds together to help avert impending disaster. The experiment uses a fictional scenario to examine real-life issues. Each night, a group of actors playing the female government of a fictional country meet with a group of international female experts in a replica of Dr. Strangelove’s War Room: defense advisers, soldiers, peace activists, humanitarians, politicians, and leading thinkers. Together they will spend the evening attempting to solve the global emergency, and stop the Doomsday Clock from reaching midnight. 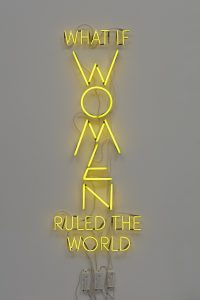 Sugar Walls Teardom reveals the contributions of Black womxn’s wombs to the advancement of modern medical science and technology. During slavery, Black womxn’s bodies were used and abused as commodities for laborious work in plantations, sexual slavery, reproductive exploitation, and medical experiments. Anarcha, Betsey, and Lucy, were among the captive guinea pigs of Dr. Marion Sims — the so-called “father of modern gynecology”— who tortured countless enslaved womxn in the name of science. Unacknowledged, Black womxn’s wombs have been central to the biomedical economy as the story of Henrietta Lack — whose stolen cervix cells became the first immortal cells leading to medical breakthrough — reminds us. Biological warfare against Black womxn is still pervasive in today’s pharmaceutical industry. “Sugar Walls Teardom” celebrates womb technology through an account of coercive anatomic politics and pays homage to these wombs; their contributions have not been forgotten. 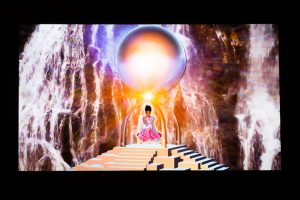 “Womb” (small) is part of a set of colorful fiberglass sculptures that Atelier Van Lieshout produced in the early 2000s: human figures in various postures and actions, but also a complete series of human internal organs, ranging from heart, brain, and liverto the rectum and female sex organs. These works are a stylized representation of the interior of the human body, almost perfect anatomical renditions of the organs that keep us going. “Womb” was created in a series of wombs including the functional sculpture “Wombhouse”, now in the collection of the Museum Boijmans van Beuningen. 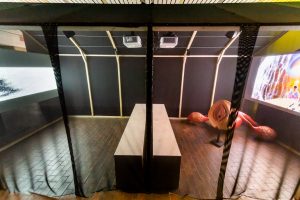 “Complex Systems” displays a digitally drawn flock of starlings scattering across the sky in a loop of ever-changing patterns. In this work themes such as the fragility of existence, impermanence, and the dichotomy between the individual and the collective form the conceptual ground of the artist’s inquiry. The title is adopted from the scientific field of network research, which employs the term to define the complex interactions between different components of the same group. The shapes assumed by the birds are proven to be the result of a defense mechanism system: in order to avoid attack by predators, a singular starling keeps track of seven others simultaneously — in doing so, the starling is able to adapt to the changing flying directions of the entire flock, thus keeping the collective intact. The dichotomy between the individual and the collective is at the core of Dolron’s interest in this natural phenomenon. “Complex Systems” investigates the relation between singular and shared intelligence, prompting questions concerning humanity, the psyche, and the possible presence of a collective unconscious. The link to the human psyche is emphasized by the cyclical character of the film; Dolron underlines the full turn of life in which the starlings function as a metaphor. Their movements change from an initial drive to a final slow fall, while the murmuration happens in an eternal loop that symbolizes the cycle of life and its fragility. The movements of the starlings, combined with the pivotal soundtrack of murmuring voices that intensify and fade according to the flock’s movements, allude to the human mind in a state of constant flux. 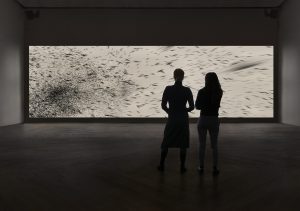 *Descriptions are lightly edited versions of previously published material by the artists.